2300MHz spectrum, a key component of mid-band spectrum for 5G

The 2300MHz band is already widely used for FWA and mobile LTE and is now becoming a key resource for 5G-NR. According to the ITU IMT-2020 requirements, 5G must deliver a 10 fold increase in the user experienced data rate from 10 Mbit/s to 100 Mbit/s, a factor 100 increase in area traffic capacity to 10 Mbit/s/m2, and a 10 fold reduction in latency to 1 milli-second. To deliver this, mobile operators require additional spectrum, particularly in mid-bands which offer a good combination of capacity and coverage. With a 100 MHz of spectrum, the 2300MHz band (LTE band 40 LTE and 5G-NR band N40) is a crucial TDD mid-band spectrum resource for mobile broadband and FWA which has better propagation characteristics than other TDD mid-bands, such as 2600MHz (N41) and 3500MHz (N77/N78).

A spectrum resource for affordable 5G

Monthly 5G smartphone data usage is already much higher than that of 4G smartphones. Average monthly smartphone data usage is forecast to increase by a factor of four to five between 2019 and 2025. The reason for this surge in data traffic is the jump in the monthly data allowance for 5G data plans compared to 4G. 46% of 5G plans launched up to May 2020 had 100 Gbytes or more included, and 26% were unlimited, all for the same monthly price as a 4G plan. This means mobile operator revenue per Gbyte is declining rapidly while consumer and business end-user benefit. For the 5G economics to work, mobile operators must be able to dramatically reduce the cost per bit. 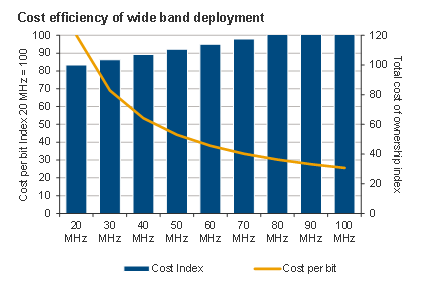 2300MHz position and relationship with other bands

In many countries only 200 MHz of C-Band spectrum is available for mobile. From a competition regulatory perspective, the 2300MHz band is an ideal solution to overcome the inefficiency that could arise of splitting 200MHz of C-Band spectrum between three operators.  All three operators could be assigned a 100 MHz block: Two in the C-Band and one in the 2300MHz band.  This means all three operators could deliver the speed requirement of 5G at a price that makes is affordable even to lower income groups. The latter point is particularly important for developing countries.

The 2300MHz band is attractive to operators because there is a 3GPP specification for TD-LTE (band 40) as well as 5G (band N40).  As of June 2020, 2300MHz TD-LTE had been deployed in 39 countries by 61 operators and 5,827 devices including smartphones and routers are available.

But what makes the 2300MHz band especially attractive is its role in the transition from 4G to 5G NR.  A 3GPP standard for LTE and 5G coexistence exists (EUTRA-NR Dual Connectivity – EN-DC). Single RAN equipment allows operators to run LTE and 5G simultaneously in a single radio. Using dynamic spectrum sharing, spectrum resources are allocated on a minute by minute basis according to traffic demand, and hence legacy LTE and new 5G users can be accommodated efficiently in the same radio. This reduces the cost of introducing 5G and optimises spectrum resources compared to a traditional refarming strategy.

The commercial deployment of 5G in 2300MHz already started in Australia with Optus, and TDC Denmark and STC Saudi Arabia have started N40 trials. The 2300MHz NR momentum is gathering pace: During 2020/2021, 2300MHz spectrum awards will be made in over 15 countries in Europe, Asia, and Latin America. The 2300MHz 5G (N40) eco-system is already in place. Since 2019, the main chipsets support 2300MHz N40. As of June 2020, seven N40 devices were commercially available with a further 14 devices announced for 2020.

The momentum that drives the 2300MHz eco-system is accelerating thanks to several industry activities coordinated by the GTI1. In 2nd July 2020, GTI released the Global 5G device initiative in GTI summit 2020, requiring devices to support 2.3 GHz and other frequency bands, which will greatly accelerate the maturity of the 2.3 GHz industry and ecosystem. On the  24th July 2020, GTI held the first global 2.3GHz spectrum roundtable and reached a common consensus that 2.3G is the golden mid-band spectrum, and officially launched the 2.3 GHz spectrum task-force to promote global industry cooperation and will release the 2.3 GHz industry white paper in 2020Q3.

Flexible use of the 2300MHz band

In several countries 2300MHz spectrum was originally licenced for LTE FWA. FWA is also one of the 5G use cases. However, rather than restricting the use of spectrum a technology i.e. 4G or 5G, and to either FWA or mobile, technology and service neutral licencing constitutes regulatory best practice. Service and technology neutral licences maximise the socio-economic benefit of spectrum because operators can use the spectrum for  FWA and mobile.  The 2300MHz band is no exception to this. For example, in an urban environment the 2300MHz band can be deployed on macro site and small cells to deliver citywide 5G mobile speed coverage. In rural areas with lower mobile traffic density, the band could be used for 4G and 5G FWA as well as 5G mobile.

Due to this excellent combination of propagation characteristics and capacity, the 2300MHz is also referred to as the “golden mid-band”.  Given the convergence of fixed and mobile, service neutral licencing is even more relevant. Recognising this, several countries have changed the 2300MHz spectrum licence conditions accordingly. From an operator perspective, an attractive point in respect of FWA is the extensive availability of LTE (band 40) CPEs and 5G (band N40) CPEs are also available. From a public policy perspective, it means that the band can help to overcome the urban-rural digital divide if a flexible (service and technology neutral) licencing approach is adopted for the 2300MHz band.

1The GTI was founded in 2011 and after nine years of joint efforts attracted 136 opetor and 239 vender partner. In 2016, GTI 2.0 was officially launched, aiming to further promote 4G evolution, 5G development and cross-industry innovation.(GTIgroup.org)